Having followed the LEAVE and REMAIN campaigns close in the days before the British EU-referendum and sitting up all night, one thing has become very clear. The British people are extremely divided along the lines of – amongst other things – demography, geography and identity, and the rifts from the last few months will take decades to heal – if they ever will.

Inter-generational:
73 % of British young people (under 24) voted to stay within the EU in Thursday’s referendum. They belong to a generation where globalisation is not seen as a force of evil and where freedom of movement is understood as a fundamental right. They thrive on the possibilities of going abroad, taking part of their education outside the UK and finding partners in others parts of the world, and as one worried commentator noted on The Financial Times’ website in the early hours of Friday morning:

“The younger generation has lost the right to live and work in 27 other countries. We will never know the full extent of lost opportunities, friendships, marriages and experiences we will be denied. Freedom of movement was taken away by our parents, uncles and grandparents in a parting blow to a generation that was already drowning in the debts of its predecessors.”

With the LEAVE side’s victory, many young people will be left wondering why they have to pay the price of the older generations’ disillusion with British politics and political leaders – and anxieties regarding the EU. Already, this generation has shown their discontent during the financial crisis with the Occupy-movement, which gained momentum in London and elsewhere in the UK, and in the coming months and years it will be interesting to see how they react to being completely ignored in a matter that affects their future to a much greater extent than the older generations’. 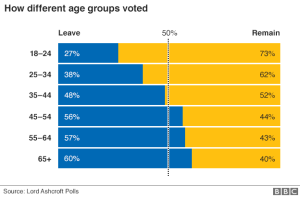 London vs. the rest of England:
Londoners overwhelmingly supported the REMAIN side – in Lambeth in South London by as much as 79 % for and only 21 % against. But as one of the few EU-friendly cities in England, even London’s millions were unable to change the outcome of the referendum. Prior to Thursday, commentators had pointed to the larger cities being REMAIN hotspots, but as the first result from Newcastle ticked in shortly after 10 pm on Thursday, it was clear that the support here was not as solid as was needed for REMAIN to win anywhere near comfortably. As the night wore on, more and more northerly cities and areas delivered a strong LEAVE vote, carving out in stone, how different – especially London – is from the rest of England.

London has for long been a global city and is thriving due to its international workforce and the many foreign companies based here. But the wealth and diversity of London is not matched elsewhere, and the result was clear for all to see on Thursday night as the results came in. In the aftermath of the referendum, London will increasingly look like an island in a sea of hostility to immigration and globalisation – precisely the two things that makes the mega-city a magnet for people as well as companies from all over the world.

England vs. Scotland:
Nicola Sturgeon, the first minister of Scotland, did not waste any time this morning. Right from the start of her press conference, she talked about a second referendum for Scottish independence. It was “highly likely”, she stated, and thereby she opens up for Scotland to split from the UK, whilst adding:

“I am proud of Scotland and how we voted yesterday. We proved that we are a modern, outward looking and inclusive country and we said clearly that we do not want to leave the European Union.”

Scotland wants to be in the EU – its politicians have said as much for a long time and yesterday 62 % of the voters shouted it out in the polling stations. With David Cameron gone – making room for Boris Johnson to take over the reins in No. 10 – UKIP on the rise and the Labour Party in disintegration, the Scots are unlikely to vote REMAIN (in the UK) in a new referendum on independence. The SNP will finally have their way and how this will influence the rest of the UK remains to be seen. 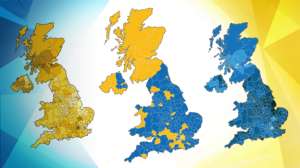 Borderlands:
Just before Nicola Sturgeon finished her press conference this morning, a journalist asked about the possibility of a physical border being imposed between England and Scotland. It would have to be erected, he said, if Scotland joined the EU and England left. The same predicament is being faced to the west of Scotland, as 56 % of the voters in Northern Ireland (NI) supported REMAIN. Like in Scotland, NI would in effect need a physical border to the Republic of Ireland (see BBC map above) when the UK leaves the EU, and this could threaten peace in NI. Already this morning Northern Ireland’s Deputy First Minister Martin McGuinness (Sinn Fein) called for border poll on a united Ireland after Brexit.

The situation in NI is vulnerable and with the Democratic Unionist Party having backed Brexit and Sinn Fein having supported REMAIN, old dividing lines are likely to surface once again – further challenging lasting peace in NI.

For more on this: see:

A new political landscape?:
Prime minister David Cameron resigned only a few hours after the result of the referendum had been announced. Boris Johnson seems the most likely candidate to take over the job, as he led the LEAVE-campaign. But Johnson is a very divisive figure. This morning he had to have police escort to leave his house as hundreds of protesters had gathered outside. As things were not bad enough for the old parties, Labour leader Jeremy Corbyn we issued with a no-confidence vote by two fellow MPs, and the vote will take place Tuesday 28th June.

No-one were in doubt, that the EU referendum would alter the political landscape in Britain. It has been in the making for a while now with UKIPs rise and lately – with the horrific murder of Labour MP Jo Cox. Still, few commentators had foreseen the immediate to medium term repercussions for the two main parties. Both could end up without a leader at a time, where Britain needs leadership to get over the dividing rhetoric of the referendum and start the gruelling negotiations with a non-too-impressed EU leadership. Instead it is left to populist such as Johnson and Nigel Farage (UKIP) to steer the UK to safer grounds, and judging by the financial markets and sense of despair on the streets of London, little faith is being placed in the two men to handle the job adequately, responsibly or in Britain’s best interest.

Where does that leave the UK? Only time will tell, but being outside Europe, with a looming Scottish dash for independence, possible strife in Northern Ireland, a youth rebellion in the making and a divided nation, it seems the only safe thing to assume is that it is going to be turbulent times ahead.